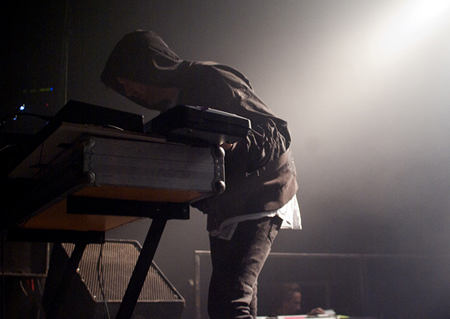 My new roommate asked me last night if I’d heard of The Big Pink, and I told him yes. He asked if they were any good, and I told him that yeah, they’re pretty good. Most people I know love the song Domino and the rest of their music I’ve heard hasn’t disappointed.

“Are they $14 good?” He asked, and I told him probably. We both wound up going. I figured the show would have been sold out, but it wasn’t. I think it was close, but we were able to get tickets right as the opening band was finishing.

I have differing opinions on opening bands, fluctuating often between ‘hey lets give these guys a chance’ and ‘get off the stage so I can see what a paid for!’ Most of the time I’m closer to the latter.

I can’t really ever tell when something makes me angry or irate, something like a band, whether it’s because I don’t like them because they’re so pretentious or if I don’t like them because I’m envious of their fame and their touring of other countries playing music. And I can feel that creeping feeling common in older people who think that any person younger than them is obnoxious, but really they miss being in their early 20’s and not caring. I was doing it in a house in north Minneapolis, up in bum-fuck Melrose and elsewhere. Never was I on a stage in a foreign country performing for hundreds of people. Given my jaded self and my high degree of criticism, The Big Pink didn’t really stand a chance.

I did appreciate the beginning of their set where they played ‘Hits from the Bong’ by Cypress Hill while they got set up, but I was hoping they’d do more with it in their first song. But they didn’t, it just faded away into the wall of noise they built as they all got set up. The first thing I thought when singer/guitarist so and walked on stage was, “Look! It’s a little Joe Strummer!”

Sometimes I can listen to songs and just like them for what they are, but in the course of the night, and the band’s need to spend all their time on slow, droning ballads. Lame. But more lame is me not knowing that beforehand. I liked it when they picked it up, but that was only right at the beginning and right at the end. I kept making mental comparisons through the night to big, famous, respectable bands. The Clash, of course, sometimes the singer reminded me of Jim Morrison (Also? I was a little drunk. But the comparison is actually true in parts. Sort of.), Ian Astbury from The Cult and others I don’t recall due to aforementioned alcohol abuse. However, the most true comparison came out of the guy next to me said, “Why would you want to sound like the Smashing Pumpkins?” And I laughed long and hard because it was the most true of all.