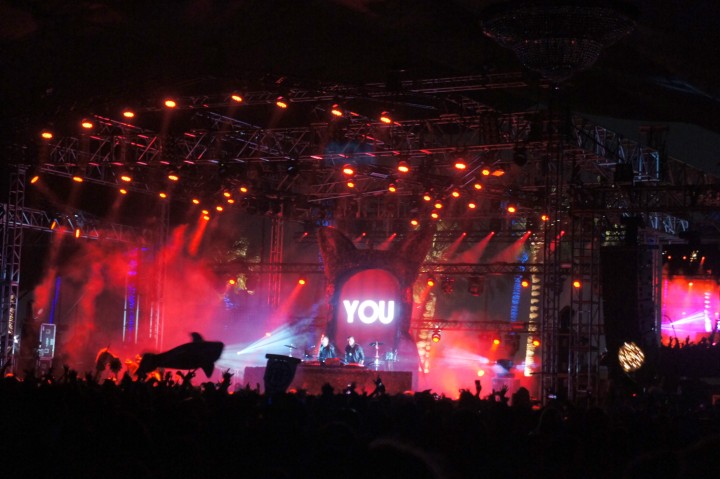 I cannot stress the importance nor the weirdness of the fact that Galantis‘ Weekend 1 performance was their first ever live performance.  Their first release, Galantis EP had been released a scant eleven days earlier.  In short, their inclusion in the line-up was a gamble on the festival organizer’s part.  Sure, they’ve both toured and played live shows, either solo (Style of Eye) or as part of a larger group,  (Miike Snow) but never as a duo.

I’ve been following the duo for the past six months or so, patiently waiting for new songs and remixes on SoundCloud, and eventually their tour announcement.  As fortune would have it, my patience was awarded when I saw their name in the small-font section of Coachella’s Saturday line-up. When we got to the Gobi Tent (the smallest outdoor tent at Coachella) it seemed word hadn’t spread far nor fast enough to fill up the tent before they took the stage.  The front half of the tent was filled, then sporadic for in the back half.  Plenty of room to dance.  For what the tent lacked in numbers, everybody in attendance was giddy and boiling over with enthusiasm.

Galantis took the stage a few fashionable minutes late, both wearing custom Seafox jackets.  They seemed as happy to see us as we were to see them.  Wasting no time, they took to the tables, fired up the music and the stage lights blinked on in unison. What came next was not what I’d expected (a clever mish-mash of their EP and remixes), but it was exactly what everybody needed: 45 minutes of in-your-face upbeat house.  The duo danced just as hard, or harder than any member of the crowd, hands and fists pumping high in the air, beating in rhythm whenever they weren’t twiddling knobs or making adjustments on the boards.  They didn’t stop moving at any point of the performance, not even to take a breath. They played ‘Smile,’ they played ‘You,’ and they played ‘Revolution.’  But they also played stripped-down, bass-heavy dub and house.  There were Seafoxes everywhere, including a large Seafox head behind them on stage, with a built-in camera they would occasionally turn around and dance at, which to the crowd felt like they were dancing along with all of us.

The whole show was a beautiful shared experience that ended far too quickly. They’re on again at Coachella for Weekend 2 (make them a priority if you’re headed there or on site already. You won’t regret it.) and have a few more US dates through April and part of May.  Hopefully more will be added soon, so everybody can have a chance to share that kind of euphoria.

3 thoughts on “Live at Coachella: Galantis”