We came, we saw, we enjoyed ourselves, but we’re still not sure what a Mamby is.

Saturday was almost a complete loss before I even got through the gates when I stepped into the wrong portapotty. The pity I would have felt for the person whose insides were so broken as to cause an instant retching was immediately overwritten by my blind rage at their complete disregard for depositing that sickness inside the toilet and not all over it. Unfortunately, I was already at the “distressed meerkat” stage of having to pee, and it was the only unlocked door.

Twenty long second later, I emerged, fully convinced I was about to throw up, and physically stopped the next guy from stepping inside. He looked like he was about to cry, and said, “I have to, I don’t care” and barged past me. I hobbled away from the sounds of another guy trying to pee and not puke, and towards the entrance to the festival.

Mamby on the Beach is a new festival organized by React Presents (also responsible for Spring Awakening, North Coast, and others) held on Oakwood Beach overlooking Lake Michigan to the east, and the skyline of Chicago to the north.The Taste of Chicago was happening at the same time, so traffic was abundant. We opted for a surprisingly well-priced Uber that slowly carried us down the clogged artery of Michigan Avenue to the sounds of some kind of soft rock solely about Jesus. Not exactly pre-party tunes for James Murphy or Zhu, but oh well. I guess I was glad I wasn’t going to that festival.

Once we got inside, myself and my two compatriots snaked our way through art installations straight out of Electric Forest or Lightning in a Bottle, complete with a yoga schedule and through a summer camp-like series of wooden structures, past vendors, and finally on to the beach itself. A light rain and low clouds hung around for most of the day, but thankfully the rain never got toot cold or heavy to be anything but a nuisance.

What a friggin view! @classixx tearing it up live at @mambybeach

We were going to start with Orchard Lounge, then move on to Goldroom and Robert DeLong after that, but man, non-camping festivals are kind of a pain in the ass. I don’t know what it is about them that make it so difficult to get there on time, but they’re like kryptonite for my intentions. So, we started with Classixx instead. After the drive with Nickelback Jesus, the portapotty, and the rain, their poppy brand of nu-disco was a refreshing change of pace.

Somebody else was nice enough to help me get started as well. Somebody named Brooke, who was ecstatic to find what’s become my kind of 2015 festival uniform, my Teenage Mutant Ninja Turtle hat. Brook was wearing her TMNT “This is My Party Shirt” and insisted on a picture. Her and her friends’ jaws were constantly shifting and flexing, their pupils dilated, and they each shifted back and forth from foot to foot while managing to talk a mile a minute. “Oh my god, I love your shirt, I love turtles, I love you, can we take a picture, here I’ll help you up, okay now point at my shirt and I’ll point at your hat, oh my god I love your hat!” 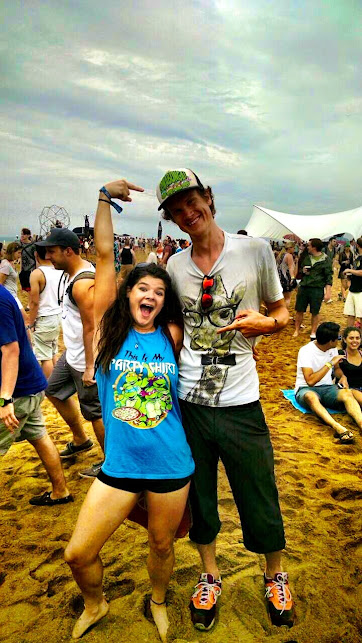 If you want great wine, you go to Napa. If you want great cheese, you go to France. If you want great House, you go to Chicago, and few people play house as efficiently as Felix da Housecat. He played what I immediately deemed the Space Tent (known just as “The Tent” on the schedule) a few hundred yards from the main stage. Felix had a crew up on stage with him as he fluidly shifted from one song to the next, hovering around the sweet spot that is Chicago House. It was a little sample of heaven, bottled up and handed around on a wet Chicago beach.

We stayed in the Space Tent for Matthew Dear, somebody I know best for his song of emotional, introspective indie pop, as on the song, “Deserter.” It’s expertly crafted, but an odd soundtrack for a beach party. I would have thought his alter-ego dance persona Audion would have been a better fit. I was so wrong, and I couldn’t have been more happy about it. Matthew Dear came to party. He was no frills, never touched the mic, and played with his attention at the decks for nearly the entire show, save for the moment when George FitzGerald came onstage well before his 6:55 set. The two exchanged niceties and George stood back, clearly a spectator as much as anybody in the crowd, enjoying the music leading up to his set.

I saw George FitzGerald last summer open for Disclosure at the Mid, and I was stoked to be back in his sweet sounds. All it would have taken to make me happy was to hear his remix of Jon Hopkins’ “Open Eye Signal,” but I’m easy to please.

If you’re wondering, he did not wind up playing his remix of Jon Hopkins, but I had a good time all the same. His set didn’t suffer for it. His woozy, dreamy house was a perfect (hour long) transition into Röyksopp’s main stage set.

Incredibly, Mamby on the Beach secured Royksopp’s sole North American tour date for the entirety of 2015, and I was so glad I was there. I’d only recently connected the dots from all the songs I knew to the single source that is the Norwegian duo pronounced phonetically, “Roh-eek-shop.” They received live vocal help from Jonna Lee (of iamamiwhoami), who provided a Debby Harry inspired sound, as well as onstage presence. She was an adept and fitting replacement for their frequent studio partner, Robyn. They were all in some kind of zone, which as it turned out, was contagious and everybody in the audience wound up in a kind of stupor, witnessing the spectacle.

My friends tried to pull me away several times to get over to James Murphy, and I’d nod okay, and start following them for about two steps before turning around and slowly coming to a stop to continue watching. If they didn’t end before James Murphy did, I never would have seen him DJ.

But I did see James Murphy DJ, spinning vinyl no less to a respectable Space Tent crowd. What he seemed to lack in stage presence, either with his face down at the decks or his back to the audience as he thumbed through his records in search of the right next song, Murphy made up for in those songs he carefully chose and mixed together. His set was easily the loudest and most rowdy I saw all weekend.

That just left us with Zhu to close out the first night of the festival. Last fall at Hard Day of the Dead, there was a scheduling change (everybody moved up 30 minutes)  I did not learn about until Zhu left the stage 20 minutes after I got there. I thought I was ten minutes late, but it turned out to be more like 40. It was not a good night.

It was Zhu who was late this time, which wasn’t a big surprise considering he had a massive custom lighting and stage to put together. No sooner had James Murphy turned down the volume than a crew of technicians began unplugging every device and cable to clear the stage for the customer Zhu-shaped tables that sat behind a 40’ projection screen.

She told me was from Morocco, by way of south Chicago | Zhu at @mambybeach #iwill #mamby #music #spacetent

At about twelve minutes past his scheduled start time, the in-between music cut out, along with the lights and the crowd erupted in cheers. The screen slowly lit up and materialized into falling snow. He made is way through the majority of his Night/Day EP, his West Coast remix, and briefly dipped into Chicago native Kanye’s “Dark Fantasy” to transition into his rework of Michael Jackson’s “Thriller,” complete with choreographed skeletons dancing across the screen.

As impressive as his light show was, I couldn’t help but think of the wasted opportunity he had with all of the fabric and curves of the Space Tent’s canvas. Even if it was just colored flood lights, the dramatic effect would have increased immensely.

The show came to a close not long after an extended version of Faded, where it seemed everybody in the audience was shout-singing along in struggling unison. It was a screeching halt kind of ending, and everybody stood there briefly after the music cut out, all realizing the bummer that is a music festival ending at 10pm.

We sat outside the festival grounds, at a distance from the giant lines to get on shuttles back to the train stations and park and ride lot. Regular traffic, even taxis and Uber, etc were not allowed near the grounds, so if you wanted to get find transportation to get you back home, you needed to do it elsewhere. We were in no rush to get on an overfilled bus full of beer sweat and feet stank. Neither was Lindsey, an incredibly friendly and buff guy who was walking around “spreading the party” with a red bluetooth speaker in his hand pumping out some really decent house. Lindsey had a friend, whose name I never caught, who was equally as nice and even more built, and was all smiles. I got the impression Smiles and Lindsey were friends, but at that moment, he was clearly in it for the music, bouncing from foot to foot.

Lindsey apologized for sitting next to my lady-friend for some reason, and asked us where the party was at. Lady pointed down at his speaker, “Obviously you’re the party!”

Mamby put on a bunch of after parties at clubs throughout Chicago, with great billing like James Murphy with George FitzGerald, but we’d opted to pony up the hundred bucks for the unofficial after party with Goldroom and Autograf. On a yacht. It felt a little bougie, but we figured, how many chances do you get to party on a yacht?
Lindsey’s face dropped a bit when we told him where we were headed, and said something along the lines of “have fun with that.” Lindsey and Smiles didn’t feel like paying that much for the novelty of a yacht show, so they took their handheld part in search of something a little more down to earth.

I’m not going to review the yacht after party, partially because it wasn’t affiliated with Mamby on the Beach, but also because it was on the whole a terrible experience. Although, I’m pretty sure they had the Mountain from Game of Thrones on their security staff. So there’s that.