I went to Coachella for business and pleasure last month, covering the festival for ElectroJams.com and seeing a bunch of music with a bunch of friends. In processing the past few weeks, I was struck by an affliction I see a lot in music writing, and in life in general. When I run through a performance featuring a women, and especially with a woman front and center, my criteria is different than when it’s a guy.

Perhaps some of the trouble stems from the industry itself. I don’t remark on things that traditionally defined as masculine in mens shows because them being male isn’t a story, it isn’t a thing at all because exclusively male acts are so commonplace. 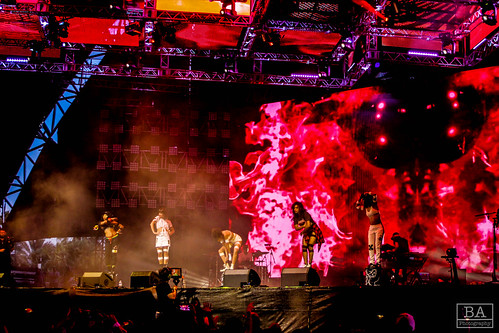 In writing about live shows featuring a woman, there is a constant internal pull to tie their physical appearance and sexuality into their performance. Maybe it does figure in, but then why when I’m writing about men do I only examine their musicality, song choices, or how they work a crowd with their music? Why do I talk about Armin Van Buuren’s trance and leave out his boyish good looks, tight shirts, and toothy smile? Why do I factor in Kaskade’s transitions and new remixes, but leave out the fact that he’s obviously just gotten a pedicure on his handsome feet? That’s weird to read, isn’t it? It shouldn’t be, but these are the times we live in. Male sexuality is taboo. It’s well tended to, for sure, but you’re not really supposed to look at it. People assume it’s like looking at the sun.

Unless a man’s choice in clothing is outlandish, or remarkable in some way, I don’t talk about it. But I always feel the need to talk about what a female performer was wearing, whether I thought she pulled it off, her makeup, shoes, etc. It’s conditioning from living in an intensely male-centric society for sure, and I do what I can to be mindful of and manage that discriminating internal push.

However, I’m not sure I can adequately talk about AlunaGeorge’s Coachella performance exclusively in terms of Aluna’s musicality, because that’s only a part of what she brings to a live show. Disregarding Aluna Francis’ sexuality feels like it would be a disservice to the thought and work she’s put into her presentation. In the case of her presentation at Coachella, where she walked to the front of the stage in a tiny pair of shorts, about faced, then slow-motion twerked…how can I leave that out?

The last time I saw AlunaGeorge, it was Halloween and Aluna dressed up as Hugh Hefner (the other two members, both male, were bunnies) at Freak Deaky. She obviously gets it, and isn’t shy about pointing it out. This time around, I couldn’t tell if she was supposed to be Leeloo Dallas or Halloween-like sexy version of Alex from ‘A Clockwork Orange.’ She had back-up dancers, too, (fully) dressed like b-girls. It was like Aluna and the Fly Girls from In Living Color. Their coordinated dance moves were clearly well-practiced and played a heavy compliment to the music.

AlunaGeorge was straight 🔥 in Sahara. I was really surprised to find Aluna had beat us to Disclosure on the main stage after her set was done, already a minute in to "White Noise." 📸: @benallenphotos

Two things occurred to me while watching her bop back and forth. One was that it felt like she was paying homage to a certain era of music, embodying the likes of Janet and Paula in their prime. It also felt like she was a natural extension of them, and operating at that same peak level. The second thing was how tall she is. I hadn’t noticed that before. She moved like a long, slender gazelle. (For the record, the trumpet player for Nathaniel Rateliff and the Night Sweats also moved like a long, slender gazelle, but I wouldn’t have written about that without this.)

By the way, the other half of the group was there, too. George Reid positioned himself in the center of the stage, all the way in back. to his right was their drummer. The stage in the Sahara Tent at Coachella is huge, and having them at the rear imparted a sense that they were more of an aside. It’s easy to assume he’s happy that Aluna garners the lion’s share of the spotlight.

Aluna was Janet, Paula, and Madonna wrapped into one. She was fierce and unafraid, and she absolutely owned the Sahara tent at Coachella. Although I'm still not sure if she was supposed to be Leeloo Dallas or Alex from "A Clockwork Orange"

The highlight of the show for me came after she announced they had new music to play, a song with the elusive Zhu. Given how incredible their previous effort, “Automatic” was, it seemed like a recipe for success. The dropped into what I later learned was a song called “My Blood,” and a success it surely was. I felt instantly drunk and aroused. I felt myself drifting side to side lazily to the beat. I think this is where I made the Janet connection, as line of dancers moved through a series of slow-quick-slow-quick movements. Aluna’s performance commanded the attention of everybody who stepped foot into the Sahara tent. Everybody focused on the stage as she held the crowd in rapt attention.

As soon as the music was through, she thanked the crowd, and had a literal and figurative drop the mic moment before briskly departing. But this isn’t where Aluna’s review ends. We started to make our way to the main stage, which is no small amount of footsteps. Plus, factoring in the throngs of people (attendance is at 90,000+ per weekend) it pushes the walk time between the two stages up to 10-15 minutes. When we finally arrived within hearing distance of the Coachella Stage, we were shocked to hear them playing “White Noise,” Disclosure’s collaboration with AlunaGeorge.

“That’s weird, why would they be pla-” and I stopped talking to make sure I was seeing things right. “Wait…she’s up there. No, seriously!” She clearly hauled ass from Sahara to the main stage to make the show with the Howard brothers. It was crazy, but there she was, and already halfway through the song. I tried to put it into words on Instagram…

Sahara could not contain AlunaGeorge, so Aluna just walked up to the Coachella stage with Disclosure and lit the thing on fire

So what does that review look like without sexuality? It would still point to the great music, the confident presence, the perfect slice of their catalog, and buzz about their incredible new collab with Zhu. But it would be incomplete. I don’t believe the music looked good because she looked good. I don’t believe in a tie between physical appearance and musical proficiency. As a rule, pretty people don’t always make pretty music. But in Aluna’s case, that is certainly the case.